Clawdeen Wolf is the 15-year-old daughter of the Werewolf. She is a fierce fashionista, and stands out in any crowd. She has many siblings, including her older brother Clawd, her older sister Clawdia, and her younger sister Howleen,. She enjoys designing fashion, and on Sora's team, she make disguises when they visit other worlds undercover.

Clawdeen is confident, energetic, and fierce. According to a diary entry by Ghoulia Yelps, she goes a bit "freaky" when in the presence of the full moon, (or something resembling it, such as a spotlight) but often ends up using this to her advantage. She's also fiercely loyal and protective to her friends and family, but can be quick to anger when her loyalty feels threatened. Coming from a big family, she's mostly had to fend for herself, which has created a streak of resourcefulness in her, some examples being not above taking hand-me-downs despite being a self proclaimed "fashionista", and even running a DIY craft video blog.

Clawdeen has brown skin, golden eyes, and curly auburn hair, although she changes her hairstyle and color often, liking to experiment since her hair grows back rather fast (she mentions in her profile that shaving and waxing is a daily routine). Her werewolf heritage further accentuated by white fangs, pointy wolf ears and sharp claws.

Clawdeen lives with her "big family in a not so big house and it always seems like there is some kind of drama going on over there. The way they argue, you'd think they don't like each other, but you'd be wrong. They watch out for each other and if you fight one of them, you better be ready to take them all". Her known siblings are Clawdia, Clawd and Howleen and unknown younger brother in the cartoon. In "Night of a Thousand Dots", Clawdeen mentioned she has a great-great-great "grandwolf" named Harriett.

In the Monster High books, her parents own a bed & breakfast. In the first chapter of the third Monster High book all of Clawdeen's siblings (five brothers and one sister) are named. Clawd (Claud) is Clawdeen's only older sibling. Then there's Howlmilton (Rocks), followed by a set of triplets consisting of Howldon (Don), Howie, and Clawdeen's only sister Howleen (Leena). Finally, the youngest sibling, at the tender age of 13, is Clawnor (Connor). Their mother is named Harriet and their father Clawrk (Clark). Clawdeen's full name is Clawdeen Lucia Wolf.

The name and number of Clawdeen's siblings was confirmed to be the same in the cartoon continuity (with the exception of Howie, whose full name is Howlston) in the 2013 Annual, although Draculaura mocks Clawdeen in "Why Do Ghouls Fall in Love?" by stating that she has at least 10 siblings.

Clawdeen is BFFs with Draculaura and Frankie Stein. She's also friends with Lagoona Blue, Abbey Bominable and Ghoulia Yelps. She started out as a rival of sorts to Cleo de Nile, but the two later settled their differences and befriended each other. She has little interaction with Deuce Gorgon, though in her diary she writes about teasing him. As of "Road to Monster Mashionals", she has a strong animosity towards Toralei Stripe for stealing the Fear Squad's fearleading routine.

Clawdeen's pet is a kitten named Crescent that's decribed as having amazingly spooky soft purple fur and said in her information "a scary cute little kitten as fuzzy as I am," but in Crescent's profile, she claims that Clawdeen's "almost" as fuzzy as she is.

Despite the fact that her profile mentions that she enjoys flirting, Clawdeen has yet to be seen interacting with a boy in any way more meaningful than one round of dancing. She danced with a cat boy in "New Ghoul @ School" and with Romulus in "Fright On!". In the "Ghouls Rule" movie, Draculaura attempts to set Clawdeen up with her cousin, Thad, which Clawdeen avoids for fear of dating. However, during the Halloween dance she finally meets Thad and finds him very attractive, so she decides to take a risk and ask him to dance.

During Lock, Shock, and Barrel's mission in Monster High, they pranked each student of Monster High. They also poured juice on Clawdeen's outfits and stained them forever, but the only ones they haven't pranked was Jackson Jekyll and Twyla, because of how Manny Taur bulllied him and how he only gets invited to parties because he and Holt Hyde share the same body. And Twyla was a very shy ghoul and showed the trio kindness. So the trio began to persuade Jackson and Twyla to join the team and become friends. After Jackson and Twyla accepted, music was turned on from the school party and Jackson turned to Holt. Holt then ratted the trio out and the students began to surround them. But right when everyone was going punish the trio, Heartless, Nobodies and the Unversed were about to attack Draculaura and Ghoulia Yelps. But before they did, the trio moved the ghouls and took the fall, and the students saw the trio fighting the REAL enemies. Lock took down the Heartless, Shock took down the Nobodies, and Barrel took down the Unversed, and as the battle ended, Draculaura and Ghoulia were thankful to the trio for saving them. But when Lock, Shock, and Barrel fainted, the students nursed them back to health. As the trio woke up in the nurses office, they were confused of why Frankie Stein and the ghouls nursed them back to help, and as the students explained, they were all forgiven and the trio explained about the Heartless, Nobodies, other worlds, and Master Xehanort, the students were shocked about their world about to be consumed in darkness. Then after Sora, Kairi, and Riku came in the nurses office from the Gummi Ship to bring the trio back to the ship, the entire Monster High student body asked to join.  Just when they asked, Lock, Shock, and Barrel asked also, and said that they'd be big help, and just as Sora, Kairi, and Riku disgused it, they all agreed and the students joined the team. 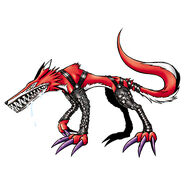