Alice Pleasence Liddel is the main protagonist from Disney's 1951 film Alice in Wonderland and the book that the film was adapted from. The voice and the reference for animators of the character in the movie was done by Kathryn Beaumont, who also did the voice on the self-titled attraction at Disneyland as well as in other media involving Disney, including the TV series House of Mouse and the first Kingdom Hearts video game. She always gives herself good advice but sometimes doesn't listen.

Story of Joining the Team[]

She joins the team after she was kidnapped by the Heartless and Nobodies, and saved by Sora, Heath, Yakko, Wakko, and Dot.

Alice is a very beautiful 10 year old girl, who can be considered cute, as she is quite young. Being of a higher born status, her skin is fair, as people in the higher classes in that time period often were. Alice also has long, thick blonde hair, just past shoulder length and big blue eyes. Her figure is slender, but in an pear shape despite being only a child. The most likely explanation is that she has started to wear corsets, as she's considered to be nearly an adult in the time period the film is set, if not then it's just the style she was drawn in or an illusion given by her dress. Alice's signature outfit is a light blue short puffy-sleeved knee-length dress with a white pinafore apron on top. Underneath her dress, she wears a corset, frilly white knee-length pantalettes, matching petticoat, white thigh-high stockings, black strapped Mary Jane shoes and a black bow in her hair.

Alice is depicted as a daydreamer first and foremost. Prior to arriving in Wonderland, she sat on the bank of a river listening to her sister reading lessons, which she didn't like as the book, her sister was reading, had no pictures, and claimed, "In my world, the books would be nothing but pictures!" This gives some idea of Alice's large imagination. And at first, Wonderland seemed like the perfect place for Alice, as it allowed her to indulge in her imaginings as well as her intense curiosity. However, despite her cuteness and beauty, Alice's quick temper and pedantic eagerness to show off her knowledge often proved to be bad qualities in Wonderland, and landed her in many precarious situations. Still she's seen as polite, honest, well spoken, lovely and respectful, if not given a reason to be otherwise.

After falling down a rabbit hole into Wonderland and meeting a host of bizarre characters, Alice follows the White Rabbit to the Queen of Hearts' court where she's put on trial for supposedly assaulting the Queen with the intention of stealing her heart. Attempting to prove Alice's innocence, Sora is challenged to find evidence, and Alice is placed in captivity. While talking with her, Sora discovers that Alice might have accidentally stumbled upon an undiscovered system of world travel due to her arrival in Wonderland from another world. Later on, when Sora brings forth evidence of Alice's innocence, the Queen's anger at his attempts lead to a scuffle. As the Queen orders her subjects to attack Sora, Donald, and Goofy, Alice's cage is covered and lifted above the court so as to keep her out of Sora's reach. During the fight, Alice becomes abducted by the Heartless and taken to the world of Hollow Bastion, where a group of villains from other worlds, led by the witch Maleficent, are plotting to take over all worlds. Their plan happens to involve Alice who, as a Princess of Heart, has the power to open the Final Keyhole, and she's kept in stasis along with the other princesses. Upon discovering her disappearance, Sora and his friends continue venturing to other worlds, keeping an eye out for Alice so that they could return her to her world. Some time later, Ansem interferes with Maleficent's plan, using Alice's heart to create the Keyblade of People's Hearts. However, a selfless act by Sora restores Alice's heart. Upon awakening, she assists the other Princesses in defending Hollow Bastion from the darkness that is threatening to consume it. After Sora sealed the Keyhole, she remains behind in Hollow Bastion to protect the world. When the door to Kingdom Hearts is sealed, she is able to return to her own world.

In Kingdom Hearts: Chain of Memories, Alice appears as a fragment of Sora's memories, a sort of doppelganger to her real self. Thus, the real Alice that Sora met in Kingdom Hearts is not aware of the following details. Alice's role is similar to her first appearance, but this time she is blamed for stealing the Queen of Hearts' memories. She manages to escape when Sora, unable to think of anything else, claims that he is the thief. After Sora defeats the real thief, a Trickmaster she assists Sora by tricking the Queen of Hearts into believing the she asked Sora and Alice to defeat the Heartless as proof of their innocence, and thus they are all saved from beheading.

Although Alice doesn't appear in the game, her name is part of the password that allowed access to the DTD dataspace in Tron's world. Her name is the fourth name in the password.

Alice reappears once again in Wonderland in Kingdom Hearts coded, this time as a data duplicate, she is chased by a Heartless but Data Sora manages to save her, but she is about to introduce herself before she realizes she had forgotten her own name. So Data Sora looks around in Wonderland and find Alice's memory. When Sora finds all of Alice's memories, she gives him the ability, HP Gain. After the events in Data Wonderland are over, she wants Data Sora to make a trade for Attack Chain ++ and she can trade him a Wall Brace for it.

Alice is a minor member, and has a winnig personality, even with Toralei Stripe. She enjoys wonders of other worlds. Alice is a member but doesn't get to be all tough or fight at all, and just giving advise. 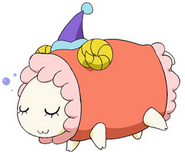